Exactly a year ago I took the journey to Wanderlust, Squaw Valley. There I attended many back to back workshops for three days straight. One particular class provided an apex to my entire experience there.
It was divine intervention and divine timing. I showed up for the class I originally signed up for. The minute I walked into the enormous room I felt off. I found a spot to lay my mat. Which was easy at Wanderlust because you just look for a round sticker with some positive statement like, "Just love" on the floor, and line the top of the mat up with it. I got on my mat, followed the instructions from the teacher, which was weird. Because I wasn't late, and she had seemingly already began. There was no real beginning to class. I immediately felt ungrounded and confused. Now, this is Wanderlust. Wander and lust. Its like we are already given permission to move around. Explore. Eat from the all-you-can-eat yoga buffet. If you don't like something, look around, find something else (not that I necessarily agree with this sort of yogic display, but I chose to play with it for the weekend).

I have never before in my yoga experience walked out on a class. My inner voice kept saying, "You can leave. Don't settle." Right than, I saw someone get up and leave. That was my cue. This was divine intervention. So, I rolled up my mat and walked out into the fresh open air wondering where I would go. I remembered that the MC Yogi, DJ Drez class just started and it was outside and yogis could just spill over onto the adjacent lawn. So being late was no big deal. I arrived to the tent where yogis were tightly squished up front to avoid being cooked by the intense sun. I didn't mind the heat. I was just glad to be there. MC Yogi, his wife Amanda, DJ Drez, and his wife Marti were on stage singing, chanting, instructing, storytelling. I already felt the love radiating from this foursome. All in their own art form, collaborating to create a transformative experience. It was simply beautiful. The backdrop of vertical rugged slopes added to the magic. While holding poses we chanted "om mani padme hum" over and over and over. I don't recall what MC Yogi and Amanda told through the storytelling. But something magical was happening. I was communing with all the people present, with the mountains. I was communing with God. The God in all things. Something was stirring inside me. Something was awakening.

When the class was over and I was catapulted back into "reality". Even though I was completely blissed out, I felt a little disappointed. Like waking up from a really good dream. I found some of my friends. We were all blissed out. And tried to find words to describe what just happened.

My friend, Corrine, and I started our way to the next thing. Food, class, nap, who knows. I felt nauseous. Really nauseous. I felt dizzy and disoriented. As we walked into the crowd of yogis, this feeling grew and I started to feel nearly out-of-body. My mind or body was grasping for something. I needed something cold. We passed the HonestTea booth, drank some samples. I decided I needed a full bottle of one (they didn't sell them at the booth). It became a short-lived mission to find one. We got about 50 feet and I could not function. I needed to sit, lay down. Anywhere.

The beautiful, harmonic sound of a hang drum filled my ears. "There", I pointed to the dreadlocked man playing the drum. "Lets sit there." I was so happy to have Corrine with me.

We sat down. First, tried to talk to Corrine and explain to her what I thought could be happening. Its the heat, I'm dehydrated. The ego is threatened by spirit and tries to reason. No, its the combination of Shiva's class this morning and this class, and the chant and...Than I just stopped trying to make sense. I laid down flat right there next to the sweet sound of the drum and focused on my breath. Big belly breaths.

It could have been hours or minutes that I laid there when I finally felt I could sit up and function. Corrine was hungry by now, and I could at least get up and walk with her to find food.

I was so thankful for this guy playing the drum, I gave him the only thing (besides my yoga mat) that I had on me. I placed a large quartz crystal in his donation bowl and said thank you with all my heart and soul, and wished him luck on his journey.

Posted by Marcy Midnight at 11:04 PM No comments:

Working with the energy of second chakra, we move slowly, like the waters of a deep and full meandering river. Or like the surface of a pristine mountain lake moves from wind gusts. Or like the continuous pulse of the ocean tides. Forward and back. In and out. Push and pull. Rippling, rippling, rippling. 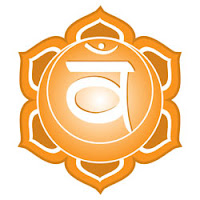 For the last month, in class, we have focused on the second chakra, Svadisthana, which translates to mean "self-sustaining". Gary Kraftsow, in his book, Yoga for Transformation, explains this well. He says that taste is the primary sense which corresponds to this chakra. We use taste to judge whether we like something or not. Taste represents the flavor of not just food but also relationships with "other".  It is a way to measure our appreciation of the essence of something.

Feeling the reality of duality. When second chakra develops, roughly between the ages of 6 months to 2 years, the child begins to sense separation of Self from "other" (see Eastern Body, Western Mind). The outer world meets the inner world through the interface of the five senses and the environment in which we live. Desire develops. Due to sensory data received, we begin to seek things, experiences, foods, that give a desired feeling. One key aspect of the second chakra is the right to feel. With a healthy balanced second chakra, we feel for the sake of feeling. Pleasure, pain, discomfort, warmth, cold all of it. Without judgement, without holding on to any one feeling.

Allowing the continuous push and pull of feeling, emotion, and waters through second chakra we open up to experiencing and embodying shakti (creative essence) in all ways. Cultivating connection and awakening to shakti gives rise to our own individual creativity. As it awakens, we move upwards into the third chakra, into action, manifestation.

Posted by Marcy Midnight at 7:35 AM No comments: