How Yoga Has Recently Changed My Life 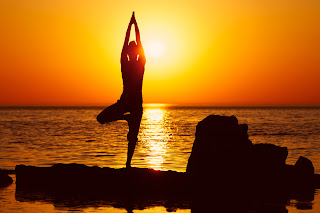 Waking up early and doing yoga. So simple, but the sustained effort required is complicated.

Most of my yogic life I have practiced in the afternoon or evening, or whenever I can squeeze it in. Before I had my daughter, I had a regularly scheduled job, in which I wasn't willing to wake up at 6am for yoga before going to work, I'd do it later (common excuse that runs through the mind with anything that requires effort). Plus, doing it in the afternoon felt better. Muscles are awake, blood is flowing and was a great antidote to the workday life. Than I became mom. Yoga found its way in at nap times, in the afternoon. My daughter turns three this June and she has been sleeping soundly through the night for about two months now. Needless to say, I am too. Which means I can spend less time sleeping because the time I do sleep is really good restful sleep. In the mist of night after night of multiple wakings... I dreamt of a time when I would be able to wake up (well rested) before my daughter, about 6 or 6:30, do some yoga and wake up quietly so that my day would begin with ritual, with clarity and a feeling of being connected to myself and something greater.

Some might be able to plan it and get the habit right away. Others, like myself, need to take steps to get it going. First, I made the decision to do it. I started to naturally wake up (I don't use an alarm) between the hours of 5-7am. Not that I would always wake up at that time. Many days I would lay there and think about doing yoga, and I'd fall back asleep, than wake up again about an hour later and would still have time to get up and do at least 20 minutes. It progressed into getting up when I first woke up. Yes, sometimes (but rarely now) it is 5am! It is best to wake up when you first wake in the morning, if you fall back asleep your body goes into another sleeping cycle which sometimes requires 2 hours, and typically we are obligated to wake up before than. So, we interrupt the cycle, waking up more tired and groggy.

Some of us depend on the alarm. I would suggest setting it earlier and earlier each day; 10 minutes each day until reached ideal wake up time. That means, maybe you only do 10-20 minutes of yoga to start. Maintaining that rhythm as long as your ready for more. Quality over quantity.

Secondly, I gave myself permission to do other morning rituals first before yoga. Brush teeth, scrape tongue, drink lemon juice water, neti pot, and yes, a cup of coffee. Than come to the mat.


Be gentle with yourself. Any amount of yoga practice is better than none; whether its 10 minutes in the morning or 10 minutes in afternoon...

Posted by Marcy Midnight at 8:33 AM No comments: